Googling the Illuminati, or Fear and Loathing in Ohio City 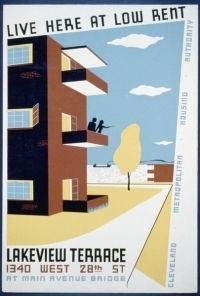 Here in Cleveland we have a couple of popular expressions which best describe community change and the planning process here-- "It is what it is", and "They do what they do".  Sometimes this takes a rather paranoid aspect in a belief in an invisible, nefarious and all powerful Illuminati. But such fatalism is just ignorance, laziness, and narcissism. Really the key to the Inner Sanctum is just a few keystrokes away.  To learn what the future of Ohio City will look like, simply type in http://planning.city.cleveland.oh.us/cwp/districts.php?dt=dist2&dn=ocity in your search bar and hit enter. Or more simply, just google The City of Cleveland Planning Commission and the site will lead your way.

I myself have never been afraid of The Illuminati, probably because I went to school with them. Although a History major, I used to hang out with the Urban Planning majors when I was in graduate school. I liked the future Urban Planning Ph.D.'s because they were the partying crowd.  And here's a secret--Urban Planners were often second tier students who went into Urban Planning because they didn't qualify for the more lucrative legal profession. Also, as a pretentious graduate student, not only did I wear a tweed jacket, smoke a pipe, read Faulkner (and drink like Faulkner) along with my Planning major friends, I took some interest in what they were learning. And as far as Urban Planning practice is concerned, I learned that "bounded rationality" is the key concept. What this literally means is that a planner can't be expected to know everything, or nearly everything, but is still required to make highly scruttinzed decisions using public money. So the practical urban planner largely relies on "best practice", and the opinions of the leading experts--it is too risky to one's career to rely on one's own thoughts and creativity. Hence there is a lot of groupthink in the field and cities tend toward copycat or cookie cutter approaches. But to the public, such a monolithic approach feels like cold callous corportism and adds to the supsicions of a Dark Hand.

So I googled up Ohio City via the City Planning Commision to see what that old crowd is up to now and was surprised to learn that Ohio City's number one "challenge" (read problem) is:

Now of course, this is just disingenuous code language.  The real problem the Planning Commission is indicating is not agencies or buildings, but the people who utilize these agencies and buildings-- the poor, the abject, and the derelict.

At the risk of being politically incorrect, it must be admitted that the poor, the abject and the derelict are not a pretty sight.  In fact, they are likely to trigger the avoidance response that comes with a feeling of disgust. Also, there seems to be little virtue connected with such economic abjectness.  A large number of these people are dirty, loud, obscene, dishosest, disrespectful and threatening. But could it really be otherwise? Hence the subtitle "Fear and Loathing in Ohio City". One solution has always been the flight away from urban distress into the suburbs.  But now, the town planners are doing everything they can to encourage a middle class flight back to the inner city.  But is the solution again avoidance? Are the abject now just to be forced out of the inner city with an ethic of out of sight out of mind?

But perhaps the new young aspiring middle class are just that callous, if not cynical and nihilistic. How else can you explain the popularityof sidewalk dining along West 25th Street. How can a person enjoy his or her meal while there are passersby literally picking up cigarette butts from the sidewalk? Such behavior fills me with disgust and an urge to avoid aspiring young professionals.

But I do not think the problem is a lack of empathy. I do not believe it is really possible to put oneself in another's shoes. But what is really needed is a cold blooded concern and hard headed compassion. We have to use our minds more than our hearts and realize that the stautus quo is not sustainable. We have to use our willpower to do the right thing, and not wait for the finer promptings of our hearts. But mostly we must use reason and realize that consumption is not self-fulfillment and that competition is only a means to contentment and not an end in itself. We should ask what we can give back to the society that has given so much to us. Perhaps we need a reversal of policy and realize that many of the abject should be institutionalized for their own good, if such institutions are humane and well-funded. Perhaps we need work programs, even if the work doesn't generate a profit, as long as it generates dignity. But because abjectness corrupts the well-off as well as the distressed, it must be a major policy concern, and the distressed should not merely be relegated to decent society's outskirts, including the outskirts of decent society's minds.

Look me up on LinkedIn, the self-proclaimed guru of Bagwhan Music.