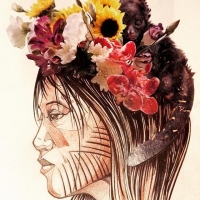 Recently, I attended opening art shows at Spaces in Hingetown and the Canopy on Lorain, both in Ohio City. And come to think of it, I don't think any of the art at either gallery was actually framed, at least in the sense of the craft of framing pictures. Actually, the craft of picture framing is an art in itself, because the frame chosen always changes the meaning of the picture displayed within the frame. For example, a red frame will pick up and emphasize the reds in picture; a big ornate gold frame will make a statement of the picture's importance. The size of the matting matters, too. Really, the frame cannot but help but become part of the picture.

Let's look at "The Big Picture" and think globally and ask how it affects art locally. The major league city of Cleveland is definitely part of the post modern global village, connected to the rest of the world by electric communication and the speed of light. Thinking of galleries in Ohio City, we should start with the first big frame, that of post industrialism and the phenomenom of global gentrification, onto current hip young American lifestyles and expectations of self-fulfillment and self-actualiaztion, onto Cleveland's postion in the "flyover zone", our Keeping Up With The Joneses Great Lakes neighbor, Minneapolis, to Cleveland itself (sometimes called "the most distressed big city in America"), onto the circle the wagons pioneering district of Ohio City, and finally to the dead center of this universe, that experiment in the process of urban planning and global gentrification called HIngetown.

According to Mr. Florida, gentrification will emerge if urban planners and the powers of governance foster and subsidize a correct mix and tipping point of artists, immigrants, and the rainbow community. These groups formed a noticable part of the original group who returned to the abandoned city and created successful urban enclaves. I see Spaces as part of this effort. But I believe Mr. Florida leaves out the most important group responsible for gentrification's success, and that would be those rugged libertarians, anarchists and diy'ers who really want nothing to do with planners, foundations, and developers-- those who squatted and and didn't ask permission but built with determation, sacrifice, and reliance on their own human and social capital-- and have now not only have been forgiven, but been admired. I see Canopy as part of this movement.

Again, this is not a matter of right or wrong, but it is what it is. If you like art, more is more. But there was a great difference between the the two art openings I attended. To begin, the private Canopy was trying to sell me something, while the establishment Spaces was trying to teach me something. The works at Canopy were small and portable and had price tags, the ones at Spaces were large, temporary installtions with no price tags meant to teach me something.  The former was offering what a private owner perceived what the public wanted, the latter what an art elite perceived the public needed.

The show at Spaces is all about promoting immigration as a good thing, as something necessary for Cleveland's growth machine, if not the city's survival. To me, it felt somewhat like propaganda-- that anyone not politically correct on this point, anyone concerned with cultural unity, the strain on the social insurance safety net, following immigration laws, and the depression of wages was a Trump backing troglodyte. And here is the irony, the crowd at the Spaces' opening was totally lacking in diversity. They were all white and all well off, and if there wasn't a black face, there was plenty of black clothing signifying the bobo ethos. But that doesn't mean the art was bad. One installation is very odd. It was Japaneses porceline made just after World War II. The figurines were hung  upside down on strings so that only the stamp "Made in Occupied Japan" was really visible. Actually, if you stooped over and looked, the figurines were quite pretty. I imagine if there were any typical high school educated Clevelanders in attendence they would be confused why these art objects weren't just simply displayed as very fine pieces of art. Crazy yuppies I guess. This work was accompanied by newsreel footage of the jingoistic American army bombing Tokyo and Hiroshima. Again, what would the typical Clevelander think?

But there was another installation at Spaces which was extremely well done and truly fine art. And that was a scultural display old old worn out suitcases, signifying the hasty departure of unwilling (Syrian?) migrants. The choice of material and spacing of these suitcase scultures was masterful--as if each suitcase was haunted by a sad story of grief and betrayal.

What struck me most when I walked into the opening at Canopy was, "There sure are a lot of black people here." which is a funny thought considering that the city of Cleveland is 53% black. But the featured artist is James Quarles, a black man who comes to Cleveland via The Columbus School of Art. Here we have no an intellectualized corporate vision of political correctness, but the expressions of an individual black man living in Cleveland in the year 2017. And here too were price tags. So there were many small inexpensive potraits of celebrities like Prince, Chuck Berry and John Coltrane, for example. But also larger more ambitious pieces with larger more ambitious prices. Mr. Quarles combines pop, street, and surreal art in a dynamic blend of human and humanoid figures, work with bold colors and sharp angular lines. In fact, his pieces are too complex to understand in a single viewing. But even though "sci-fi"is a word that easily comes to mind here, there are also several "political" works. But here the politics is about police oppression in the inner city, something an insulated, if not gated, establishment would prefer to ignore. Mr. Quarles work is quite emotional as well as individual. To a white person like myself, it seems to ask, "Do you feel me?"

In the end, we are really lucky to have the diversity we have in Ohio City, including committees and foundations as well as red blooded individuals. So get out of the house and try sometimes see things differently. Sometimes frames were meant to be broken.

Look me up on LinkedIn, the self-proclaimed guru of Bagwhan Music.